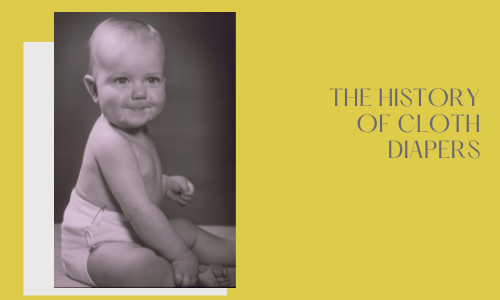 Today's reusable diapers are easy to use, convenient and beautiful. But has it always been this way? Of course not. :)

The prototype of a diaper

The history of diapers goes back to the dawn of time. Do you know that the prototype of cloth diapers was moss and animal skins and furs? Moss has natural hygroscopic properties, so it was an absorbent material, whereas leather/fur was supposed to support the construction and not let moisture through.

Diapers from the Far East

While tracing the history of diapers, it is also worth mentioning a Japanese invention called ejiko. It was a basket with a mattress having a cut-out for the bottom, under which different absorbent materials were placed - fabrics, ashes or sawdust. This invention undoubtedly had many advantages, but due to its size, it was not very comfortable.

In China, on the other hand, children didn't wear diapers at all. Undoubtedly, this country was a precursor of Elimination Communication. Chinese children walk naked from the waist down, or wear pants with a special cutout on the bottom.

The real revolution in the field of children's diapering began with the invention of a safety pin by Walter Hunt in 1849. This invention was a breakthrough in the search for solutions facilitating the use of cloth diapers and one after another, new absorbent materials or waterproof layers were invented. This revolution was undoubtedly slowed down by the invention of the first disposable diapers (Procter&Gambe,1961).

Disposable diapers in the form we know today appeared only in the year 2000 in the United States. They were fleece covers created by FuziiBunz company.

The first reusable diaper in Poland was produced by the Nappime company in 2010.
Professional e-commerce software